Grapevine will soon be home to the coolest place in Texas to catch a train. Thanks to the groundbreaking of Grapevine Main, a $105 million mixed-use project located on the northeast corner of Main and Dallas Streets, transportation in DFW is getting easier. 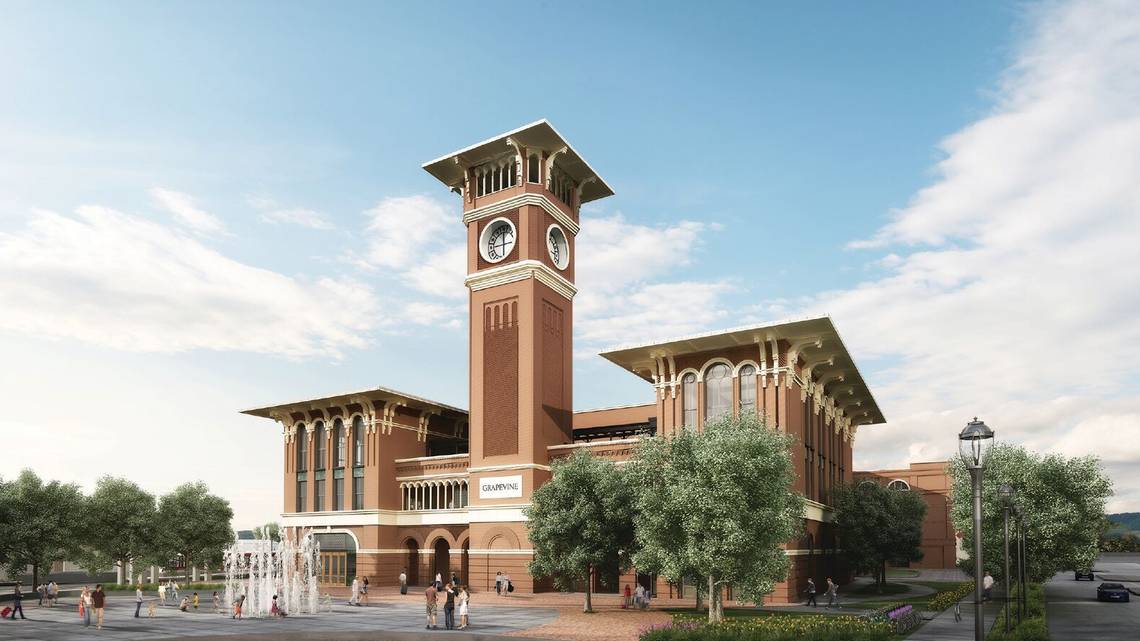 From its 150-foot observation tower to the five-story train station and 121-room hotel all tied together with 19th-century-style architecture, TEXRail passengers won’t need an announcement over the train’s speakers to know where they are.

The project will set a new standard for transit-oriented development in North Texas. It will also include restaurants, retail and a 38,000-square-foot outdoor plaza. The plaza will feature interactive fountains, a memorial for Native American tribes and room for thousands of people to gather for special events.

The groundbreaking was Wednesday morning and about 130 people showed up to celebrate.  A wine toast was featured before the ceremonial shovel dig. Construction has already started on the 552-space parking garage and the train platform. 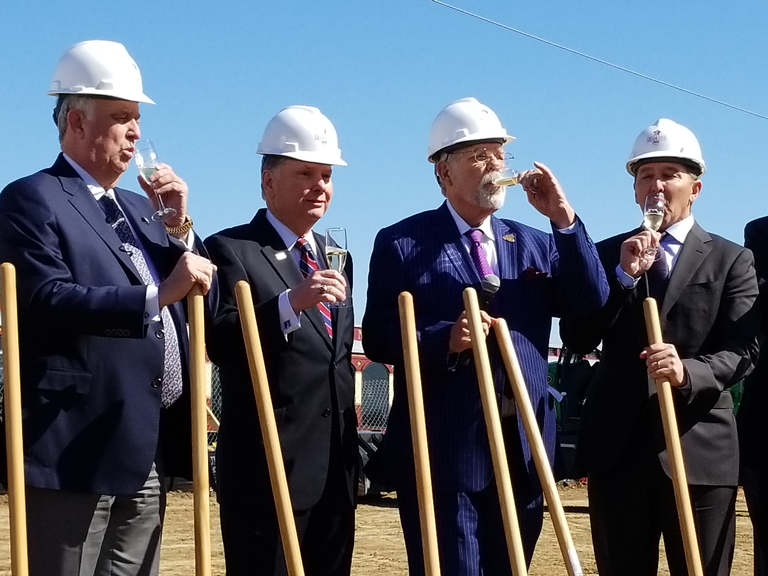 TEXRail will be a 27-mile passenger train. It will have stops in downtown Fort Worth, Richland Hills, Grapevine and Dallas/Fort Worth Airport. The train is now scheduled to start service the first week of 2019. The Grapevine Main station and Hotel Vin are both scheduled to open in late 2019.

Grapevine has been one of the strongest supporters of TEXRail. Voters approved the sales tax allocation in November 2006.

Ballard said, “When others in the region said, ‘That train will never run,’ our team looked to the citizens and the leaders of this community for support and encouragement that never wavered,”

“Those that chose not to participate in TEXRail will soon live to regret that decision,” said Tate, who is running unopposed for his 15th term. “We’re glad to offer to all of our neighbors a standing invitation to come to Grapevine to enjoy all of the benefits of TEXRail.”

The remarks were a veiled shot at cities like Colleyville, which passed on the opportunity to have a TEXRail station at John McCain Road and Colleyville Boulevard after a backlash from residents.

Colleyville Mayor Richard Newton later responded to the comments. He told the Star-Telegram: “Colleyville is blessed with an exceptional quality of life and we have a clear vision for our future. Colleyville’s master plan for accomplishing that future does not include a train station, but we congratulate our neighbors who celebrated a groundbreaking today for a project they feel will fit the needs of their city.”

Grapevine Main will be about an 8-minute train ride from Terminal B at DFW Airport. Here, passengers can catch flights at any terminal via Skylink. Riders could also walk over to the Dallas Area Rapid Transit station at Terminal A where they could catch a light-rail train to destinations throughout Dallas and Collin counties. 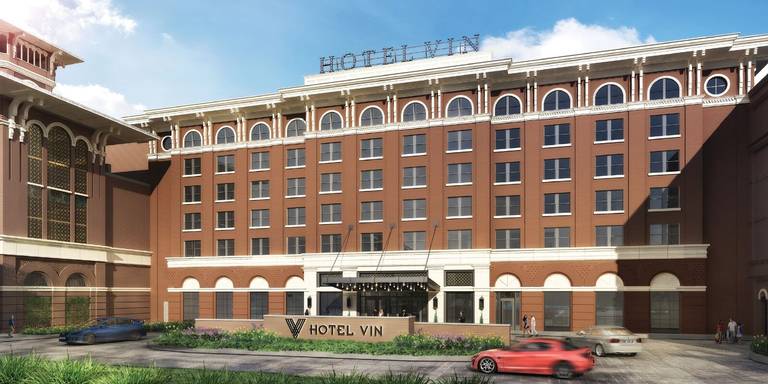 Access to mass transit will help attract young urbanites who want to live in a walkable environment, Tate said. The Hotel Vin, a play on the French word for “wine,” will be a boutique hotel operated by Coury Hospitality under the Marriott International Autograph Collection brand.

The walkability will make it a destination for travelers from the airport, Ballard said.

“This hotel and development will also become one of the best U.S. examples of what Americans look for on their European trips,” Ballard said. “That is, a cool train to a cool town with a cool hotel just steps from the station platform.”

Business owners on Main Street are also excited. Grapevine Main will increase pedestrian traffic. The management at Chill Sports Bar & Grill just across Main Street has waited years for this to happen.

“It’s going to create a whole new spectrum of guests through Grapevine,” said Chris Packett, general manager for Chill. “It’s a higher-end hotel, not a normal run-of-the-mill Motel 6, so it’s going to bring a good clientele.”

“It’s going to bring more visitors and more customers to our businesses,” Leonard said. “It’s just another example of how Grapevine really pushes the envelope of bringing business to the community.”

Grapevine resident Charlie Vanzant said he’s been looking forward to this since the sales tax allocation passed in 2006. 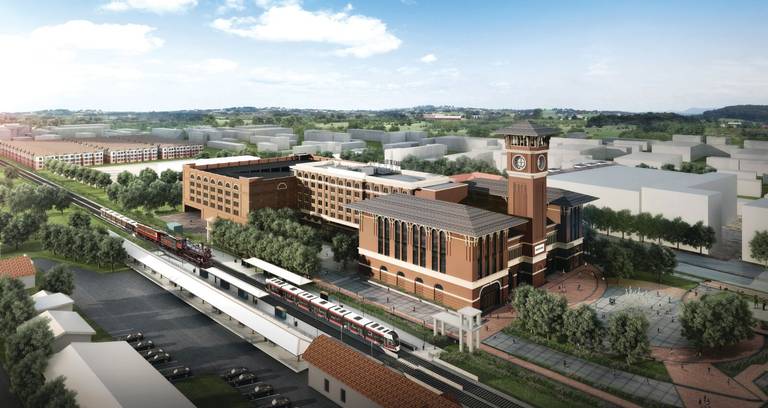 Vanzant said, “We’re just excited to see Grapevine tie into DFW Airport, which is a transportation hub for all of Texas. It’s going to get vehicles off the highways. Furthermore, we have got to have mass transit.”

Ballard acknowledged that the project has been delayed for years. He says the first time he met Tate, the Grapevine mayor didn’t know if he’d live long enough to see TEXRail.

The TEXRail train cars will also begin test runs later this month. These will continue through the end of the year. Trinity Metro will run six trains during peak hours.

The first trains will run before 5 a.m. and the last one will leave just after 1 a.m. TEXRail will operate 365 days a year. The trains are built by Stadler and will be manufactured in Utah.

Construction continues with a major road closure on eastbound Texas 114/121. Closing is scheduled from 8 p.m Saturday to 5 a.m. Sunday, said Brian Murnahan, public relations officer for TEXRail. The closure will allow workers to erect beams for the 1,400-foot bridge. The bridge will also carry trains over the highway and into DFW Airport. The TexRail expects more highway closures.