Quarry Falls Opening in Fort Worth 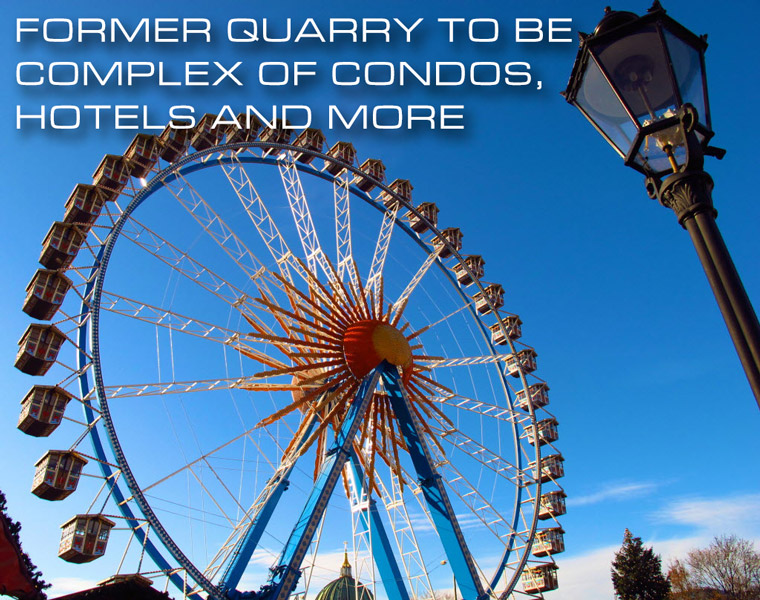 Developers hope to turn a former quarry site in North Fort Worth into a sprawling complex featuring hotels, condominiums and a Ferris wheel.

Known as Quarry Falls, the project is planned on an 80-acre site north of Loop 820. It will sit between Meacham Airport and Saginaw, the Fort Worth Star-Telegram reported. Construction could run as high as $280 million.

A limestone mining operation once dominated the site but shut down in the 1970s. Since then, residences have since sprung up in the surrounding area. The land was mined for a half-century, forming a large lake.

Where rock was once mined, developer Ed Casebier now envisions people. Lots of them. In addition to hotels, condos, restaurants and bars, the project includes tourist attractions.  Two hotels, a conference center, a 3,500-capacity music arena, as well as a beach-fronted lake with a splash park and Ferris wheel up to 135 feet tall will appear.

“We want the people in the neighborhood to come over and use the beach and enjoy the retail,” said Casebier. He is president of Renaissance Development, the project’s lead firm.

The attractions will be immediately accessible to on-site residents. People beyond the boundary will be able to enter for a small fee.

“Everyone who lives in that area will have access to it,” Casebier said.

Building could start later this year. However it will probably would take several years.

Similar quarry redevelopment projects have been pulled off in places around the world. Kansas City, Louisville and an area near Shanghai all have similar destinations.