Texas is an Oasis for Job Seekers

Job Seekers are Headed to Texas 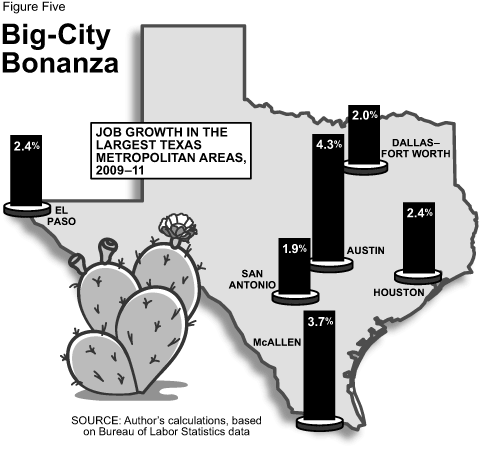 ‘If you had to ride out this downturn, there is no better place than Texas. The declines here have been nothing compared to other states.’

BY STEVE CAMPBELL
ACROSS THE NATION, UNEMPLOYMENT IS SKY-HIGH, THE HOUSING MARKET IS SUCKING WIND AND RECESSIONARY FEARS HAVE FROZEN AMERICANS IN PLACE.

Just don’t tell that to a stream of new residents who are “voting with their feet” that Texas is the safest place to ride out the storm and the place to be when the economy recovers.

Even in the midst of a recession, economists, demographers and relocation experts believe the Lone Star State is on the cusp of becoming The New California.

Or maybe it already is.

For people seeking economic opportunity, Texas is becoming what California has been since the Great Depression, says author Joel Kotkin. Texas recently “ran the table” in a recent list of “Best Cities for Jobs” prepared by Kotkin for New Geography and Forbes. Austin, Houston, San Antonio, Fort Worth and Dallas were ranked as the top five large metro areas in the country to find a job. Furthermore, McAllen and Odessa top the mid-sized and small city categories, respectively. Among 333 metropolitan areas, Texas has a remarkable 20 in the top 100.

Relocation surveys show that Texas remains a top destination for people leaving other states. Automobile registrations continue to climb. It’s housing market has avoided the double-digit declines other fast-growing states have seen. While the unemployment rate has risen, it’s nowhere near as high as most of the country.

Kotkin, a professor at Chapman University in Orange, Calif., who analyzed U.S. Labor Department statistics for his report, says Texas’ dominance at the top of the jobs list is unprecedented.

“Part of it is a function of the economic collapse of Florida, Phoenix and California. The collapse is still important in Texas, but it has had more balanced growth and that’s more sustainable,” he said in a telephone interview.

“Part is the nature of Texas: People don’t move there for climate and scenery,” Kotkin said. “They move to Texas for jobs and also affordable housing. People make economic decisions to go to these places. They don’t go for perfect weather where you can surf one day and ski the next.”

Selling “everything but the deer head” and leaving Detroit was simple math for Rodger Benton after Hewlett Packard laid him off.

“It was pretty much a no-brainer to make the move,” he said. “The unemployment rate in Michigan is really high. Things are really tough up there. There’s also just more opportunity here.”