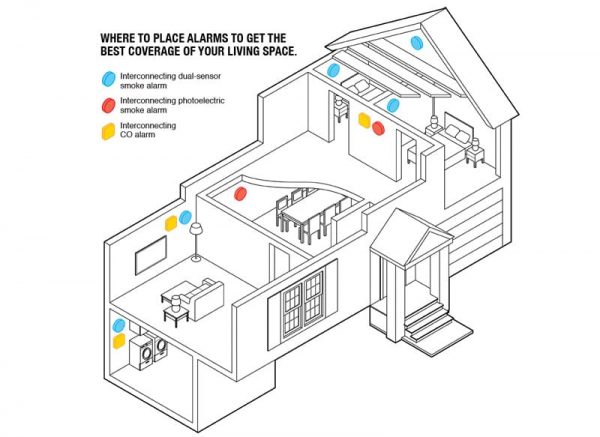 According to the Centers for Disease Control, fires are a leading cause of death in United States homes. This agency also reports that over 400 Americans die each year due to carbon monoxide poisoning. These fatalities are usually preventable with the use of CO2 and smoke detector equipment.

The U.S. Fire Administration recommends placing a smoke detector in strategic areas of the home including the kitchen and each bedroom.

A home should have at least one smoke detector on each floor, including the basement. Some other areas are hallways, attached garages and utility rooms.

Homeowners should check smoke alarms monthly. Change batteries if necessary. Smoke detectors should have new batteries placed in them at least twice a year. The exception to this rule is if a lithium battery powers them. In this case, homeowners should plan to replace the entire smoke detector every eight to 10 years.

The Consumer Product Safety Commission recommends placing carbon monoxide detectors in any area where wood, coal or gas is being burned.

Locations where portable generators or gas water heaters are used are also good choices. Homes that burn wood, coal or gas should have carbon monoxide detectors placed in bedrooms and kitchens and on every level of a home so they can alert residents to the presence of this deadly gas.

Home Safe recommends placing carbon monoxide detectors at least 15 feet away from fuel-burning appliances such as gas stoves or furnaces.

Placing them in one of these areas increases the risk of false readings. That’s because a small amount of this gas is emitted by appliances during startup, yet is not necessarily a cause for alarm.

Carbon monoxide detectors also require regular battery replacement. A good rule of thumb to follow is to change the batteries in the spring and fall in conjunction with Daylight Savings Time. Check the backup batteries on a regular basis.

Home improvement stores such as Lowe’s or The Home Depot carry inexpensive smoke and carbon monoxide equipment. In some areas, local fire departments may offer them free of charge to residents within their jurisdictions. This equipment is easy to install and maintain. It provides a life-saving service to those who take the time to place them inside their homes.