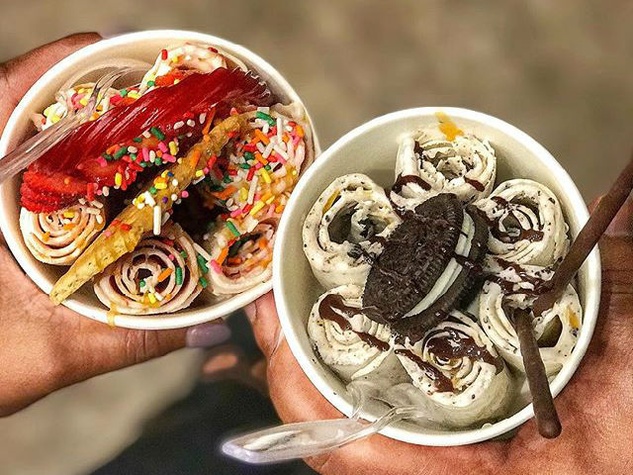 Grapevine, roll out the welcome mat.

Continuing its path towards world domination, ice cream shop Chills 360 will open a new location in the Dallas-Fort Worth area: this time, the city of Grapevine, where it will open in spring 2018 at 120 S. Main St., at the southwest corner of Northwest Highway.

The shop will take over the space being vacated by Su Vino Winery, the make-your-own wine shop which closed on December 17 after a decade.

Grapevine represents the fourth local branch for Chills 360, which has enjoyed tremendous success since its first shop opened in Deep Ellum in 2016.

They were among the first to introduce DFW to the concept of rolled ice cream, aka “Thai-style ice cream,” like the modern-day version of Coldstone Creamery, where an ice cream mix is poured over an icy cold disc until it freezes, then gets rolled into eye-catching pinwheels and doused with toppings ranging from M&M’s to fruit. Customers can choose their flavors and combinations, then watch it made before their eyes, which adds to its appeal.

Chills 360 owners Mohammad and Javeria Babar have followed up their Deep Ellum debut with locations in Rockwall, Fort Worth, and even Houston, with more Texas locations in the works. Finding the right address is key, Mohammad says.

“Part of our success is that we are in downtown areas: downtown Dallas, downtown Rockwall, and downtown Fort Worth,” he says. “Downtown Grapevine, we love the culture, the atmosphere, and the character. We look for higher traffic, late night, restaurants, foot traffic, and busy areas. Grapevine was a natural fit. There is always something going on in Grapevine. During the holidays, it’s always a destination for people from all over DFW and beyond.”

DFW has since attracted more rolled ice cream places, including New York chains I•CE•NY and Hi Sweetie; Furthermore, a concept called 10° F Rolling Ice Cream at the at the Shops at Willow Bend in Plano; and 7 Degrees, rolling in Carrollton.

Finally, Chills 360 stays ahead of the pack by focusing on innovation. For example, they were among the first Dallas ice cream shop to jump on the coconut-flavored black ice cream trend.

“We are always adding more products and will continue to bring something new and innovative to the market,” Babar says.

Best Running Trails in Northeast Tarrant County
Habit Poem: A Great Motivator | Minteer Real Estate Team
Get the Most Out of Your Yard!
×
My Digi Product